Momy Fortuna is a ritualistic, neoclassical , cultwave band and their astrological sign is horror-score.

“The debut album delivers an even more wonderfully brooding experience dedicated to witchy delights. The entire album is fun,spooky and a cacophonous journey through the underworld touching on themes of death, sex, and fate all while keeping a keen sense of humor and fairy tale playfulness.”
-Procession Magazine USA

“The eight tracks are unlike anything that has come out of the local music scene since the days of such goth rock-tinged crews as Family Plot and Der Mittelgang. It’s a unique bit of occult-laden horror score that deserves to get plenty of spins heading into the darkening days as summer fades.” -Vancouver Sun

“there’s an undeniable charm that’s applied to “Hexennacht”. To me, “Hexennacht” stands out as more than just music; it’s a thematic art piece and a labor of love from the four women behind the project. The elements of horror, suspense, occultism, and generally dark music are masterfully crafted. Whenever I spun this album throughout the week, I found myself awaiting for it with anticipation amongst the other albums in rotation. I hope this album gets released on vinyl with the liner notes included, as I believe that the full experience can only be acquired through those. Easily an eight-and-a-half out of ten and one of the highlights of my year so far.”  -Brutal Resonance Magazine

“Momy Fortuna’s intense sound is ready to summon forth demons and spirits alike: with their howls of incantation, banshee shrills, electric violin, neoclassical keyboards, dark-wave bass guitar and ominous drum beats, Hexennacht is dynamic, eerie and ethereal as it orchestrates a truly out-of-body, hair-raising experience. This is a cult-wave coven slumber party that you don’t want to miss: satiate your curiosity in the occult and throw yourself into the Black Mass of the haunting Momy Fortuna.” -Post Punk Magazine

“This tetrad of would-be witches collectively conjures a series of dark, carnivalesque numbers that one would expect to hear after downing some bad acid too close to Halloween at the local amusement park.” -ReGen Magazine 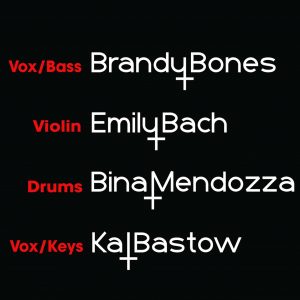